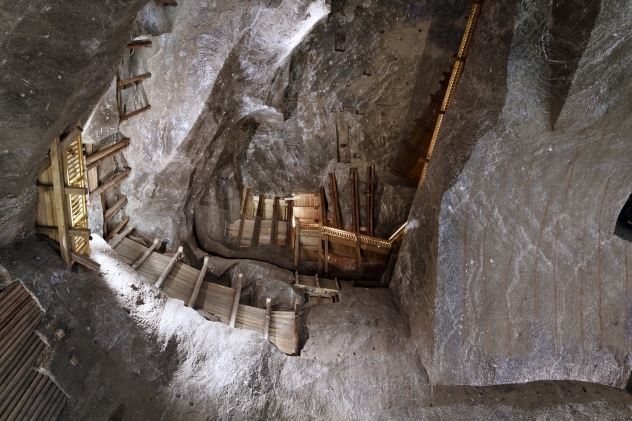 THE LARGEST SALT MINE IN THE WORLD, GODERICH ONTARIO

The world’s largest salt mine is right here, in Goderich, Ontario. You can find the salt mine located beneath Lake Huron. It’s so extravagantly large that it’s hard to visualize: the mine is as deep as the height of the CN Tower. In 2014, according to the Toronto Star, the mine was producing 2,600 pounds of salt per day - an amazing feat for any salt mine. Yet, all of this salt was discovered by accident.

Back in 1866, the owner of a flour mill, Sam Platt, was looking to strike it rich in oil. According to Business View Magazine, Platt drilled 1,000 feet deep below Goderich Harbour, where he found an enormous amount of salt. Though Platt may have been disappointed at first, he soon came to realize this was the first salt bed ever encountered in North America, which was a significant find.
In fact, Platt had discovered the very edge of the Michigan Salt Basin, a geological formation full of various kinds of salt, as well as bromine, iodine and more precious minerals. It may yet be possible to get oil out of some areas of the Michigan Salt Basin, but it wasn’t meant to be in Sam Platt’s lifetime. Instead, he sold his discovery to businessmen looking to mine the salt. The Goderich mine changed owners a few times until Sifto Canada, now under its parent company Compass Minerals, got to work making the largest salt mine in the world.
Over the years, Sifto Canada has added more shafts to the mine and increased its salt production. Especially as salt began to be used for de-icing, there has been an ever-increasing and growing demand in Ontario.

Working in the Salt Mine

When miners arrive at the Goderich salt mine, they still need to travel down to work. According to Road Stories, there used to be a kind of bus system that would bring workers down into the shafts, but now the mine is too large for that. Today, specialized utility vehicles bring workers out to the shaft they’ll be mining in.
In fact, dump trucks and other larger machinery have been built inside of the mine, because it would be too difficult to lower heavy equipment down. So, huge rooms have been carved out of the salt to act as storage bays for the machines, as well as repairs room, and even lunch rooms for the employees.
With the help of machinery and explosives, the employees chip away huge blocks of salt. It is mixed with water and pumped up to the surface where mechanical evaporation purifies the salt. Since its opening, the salt mine’s 600 workers have produced approximately 150 million tonnes of salt. Compass Minerals expects that the Goderich location will be mined for salt for another 120 years!

At Draglam Salt, we’re dedicated to all things salt. Whether it’s salt from the Goderich salt mine or other Ontario mines, we’ll deliver high-quality road salt and deicing materials right to your doorstep. Contact us to order your bulk rock salt, road salt, or deicing salt – or if you have any questions about our services. Don’t forget to call our 24-HOUR Salt Hotline at 1-888-907-SALT for any emergency orders or special requests!